Items that do not fit the categories above.
Forum rules
Please do not use this forum to advertise, sell photos or other products or promote a commercial website. For more details, please see the Terms of Use you agreed to when joining the forum.
Post Reply
70 posts

Hopefully this did not have it's own area, I looked but could not find.

I have a few questions for those that have climbed this route. My goal is to be picked in the lottery in 2019 and make a 2-day out of it... Up the Mountaineers and down the Portal Trail, that way I get to see more and cash in on Mount Muir on the way down.

My biggest question is pertaining to the "Final 400"... I have watched a few headcam videos, and google earthed the route. To me, other than the first 10-20 feet it looks like a steep boulder/ledge climb, nothing really exceeding hard Class 3. Yes, a long tumble could be your last but the odds of that happening are fairly slim. In Colorado it surely would be rated Class 4. But my question...

Is there any 14er or high 13er route in Colorado that is similar in nature to the Final 400?

I have done most of the hard 14ers and can't for the life of me remember anything like that route on Whitney. I'm sure it's unique but is there anything similar.

Also, regarding the final 400 and exposure, is it really any different than say Pyramid, Maroon? I have done those and they clearly did not have the solid rock that Whitney has but it was far looser and at least from viewing youtube videos they were at least as steep and the drops were significantly longer..

So... any thoughts out there?

And lastly... Yes, those E-Ledges look daunting and I do NOT want to minimize the obvious consequences of slipping and kissing your butt good-bye, but seriously, it looks like a cake walk to me in dry conditions... it's walking... LOL Thoughts?

I did the MR about 3 years ago, the final 400 is not bad at all, solid rock, and the exposure isn’t bad at all. Not sure what to compare it too, if you’ve done Pyramid and the Bells, you’ll be fine.
Top

Thanks Audie, yes I have done Pyramid and both Bells... quite frankly I thought North Maroon was far easier than its reputation. Pyramid was a lot of fun once you get above 13,000 feet... before that it sucks.. And in MY experience Maroon Peak was the hardest physically and the most dangerous mountain I have ever climbed. I made it with no issues but boy is it loose and steep at the end... the drops are everywhere.. but is was great fun.

I was seeing videos on the Portal Route, which is rated as Class 1, and some of the trail high up on the mountain gets very narrow with huge vertical drops... from purely a "be careful" perspective many of those spots look far more dangerous than anything on the MR route...besides the E-ledges of course. Yes, it's Class 1, but fatal drops are all around you, that's for sure.

I just like being mentally prepared. The physical will just happen..
Top

I did the MR route up, and standard down a couple of years ago.

In my opinion, if you stick to the non-optional stuff, it's barely a class 3 climb. we stuck to the right side of the first gully, which was a light class 3 section, to stay out of the scree in the center, then explored the upper gully. There's an easy step system to go up right, with no exposure. We went left and played around a bit. The only true exposure you'll find is on the ebersbacher ledges, with the worst spot only requiring a couple of quick steps to work through, but a fall would likely equal death.

That being said, it's a beautiful route.

If you get the permit, I would personally opt for Russell, Whitney's next door 14er neighbor. The east ridge route is a true classic, and is comparable to Capitol minus the shitty rock and rockfall potential. It consists of just over a half mile of pristine, stable but extremely exposed ridge-line with class 3/4 climbing and a few knife edge sections.
Top

My daughter and i climbed Whitney via the Portal Route on September 4. Highly engineered trail with nearly constant grade over the entire length (thus, many switchbacks). There are a few sections once on the ridge where you have to step from boulder to boulder but I'd rank it as Class 1. True, there is some exposure for a very unlucky fall but not worth thinking about (in contrast to the Mountaineer's Route). Our RT Distance was 19.5 miles and every gps track I've seen posted is considerably shorter than the 22 miles advertised. With ups/downs on the ridge, I measured more than the advertised total gain.

I failed to get permits in the April lottery and checked regularly without success until the day before we left Colorado (three days before our hike). It appears things tend to open up at the last minute; there's a procedure to show up for unused permits.

I have wanted to summit Whitney and the Mountaineer route sounds much better than the normal route. I would be down for it next year.

Bill
Consecutive months with at least one 14er, 40 months and counting...
Top

Is there any way to bypass the E-Ledges? I thought I read somewhere that a new route had been created... or discovered.. LOL

How far up the trail are the E-Ledges.. I will be driving from Reno to Vegas soon and thought about just hiking up to the ledges.. It sure don't look too far from the Portal.
Top

I did the MR as an overnight a few summers ago and loved it. The E-ledges in daylight are nothing to worry about...just work your way up and follow the obvious route (would be a lot different at night, however). On the final 400 I personally felt it was a more sustained version of the crux area on Lindsey's NW ridge. Definitely a no-fall zone but solid rock in a beautiful setting.
Top

Climber 4037 wrote:Is there any way to bypass the E-Ledges? I thought I read somewhere that a new route had been created... or discovered.. LOL

How far up the trail are the E-Ledges.. I will be driving from Reno to Vegas soon and thought about just hiking up to the ledges.. It sure don't look too far from the Portal.


The ledges are only about a mile and a half up the trail, maybe two, and well below treeline. I've been through them three times, once in the dark and two times with backpacking gear, and didn't have a concern. It's only one section of the ledges that are rough and it's over in 2 steps, literally. If you don't plan on summiting, at least hike up to Upper Boy Scout. It's magnificent.
Top

rgsaxman wrote:I did the MR as an overnight a few summers ago and loved it. The E-ledges in daylight are nothing to worry about...just work your way up and follow the obvious route (would be a lot different at night, however). On the final 400 I personally felt it was a more sustained version of the crux area on Lindsey's NW ridge. Definitely a no-fall zone but solid rock in a beautiful setting.


Everyone has different opinions, but I didn't feel the block hopping was worthy of being paired with the "no fall zone" designation. The consequences aren't severe. It's comparable to the final pitch on Eolus, maybe easier, as long as you hang right towards the top of the gully.
Top

Just in case you are looking at going early as a possible snow climb...
We've attempted the MR twice in April - both as a spring snow climb. At that time, the E-Ledges (in the dark) were still not a big deal, but must be very careful for ice. Routefinding down them is also worth attention, as missing a turn could leave you cliffed out. The comment about another route is probably referencing when there is a ton of snow: The E-ledges let you avoid attempting incredibly dense willows (you would not be able to get through them). When there is lots of snow, the willows are covered and you can just walk on top.

After that, we turned around both times on the final 400: Once because of unconsolidated snow at the notch (runout directly over a cliff), and the second time after making about halfway up but too much ice covering the ledges. This second time would have been very doable with protection in a few places, but not safe at the time we were attempting. The long couloir before the Final 400 is definitely tough and steep, but not if you have tried Colorado spring snow couloirs, I think it touches the low 40 degrees here and there but is mostly in the 30's. Overall it's a pretty steep route- around 1300 feet per mile for over 6000 feet.

If you aren't going as a snow climb, I agree it's probably only a ~ steep class 3. However, keep an eye for loose rock - our closest call in the mountains came when someone above us in the long couloir kicked down a cinder block sized rock that (thankfully) only nailed my backpack, but still sent me sprawling.

It is a gorgeous climb, in a very cool area! Highly recommended. Alabama Hills, the sierra crest, Lone Pine...try to add some days to your trip to explore! 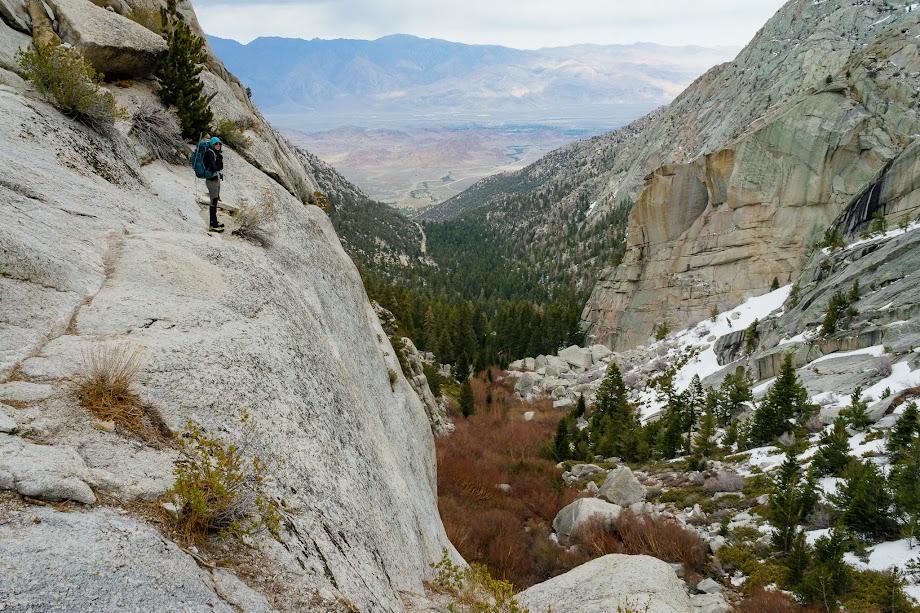 Part of my desire to climb Whitney is that I'm a scenic photographer and hiker/climber.. the entire area fascinates me. Plus I plan on spending time in Death Valley (my favorite, though not the best place to acclimatize

) before I do my climb. It's such a beautiful area out there...

I thinks is so crazy how utterly amazing Whitney looks from the Portal side yet is a flat barren pile of slab rocks on the top.. Reminds me a little of Longs Peak though in a more technical route.. I love the ruggedness of the Sierra, and the color..

I'm really not concerned about any part of the hike, just curious to see what others say and to hear their experiences. Yes it's high, yes it's long, yes it's dangerous, but yes, 7500 do it every year..

The Narrows on Longs Peak are narrow with deadly drops also... but it's a piece of cake.

Now to win that damn lottery