Items that do not fit the categories above.
Forum rules
Please do not use this forum to advertise, sell photos or other products or promote a commercial website. For more details, please see the Terms of Use you agreed to when joining the forum.
Post Reply
6 posts • Page 1 of 1

Going off of Scott P's great breakdown of Utah and Colorado peaks, plus the great discussion about mountains in other states, I'm still wondering about the difference in treeline elevation in places. Scott mentioned that Utah averages 10,900 ft for treeline and Colorado 11,800 ft. I know it's really low as far north as Glacier NP in Montana. That makes sense to me: the farther north you go the colder it gets (harsher, longer winters) and there's less direct light for trees. But does anybody know why the 1000 ft difference from Utah and Colorado?

That further prompted me to wonder if there is much variance within Colorado itself, say from the Sangres to the Mummy range, on treeline elevation? I've never noticed any myself, but I wasn't really looking for it. (Sheepishly, I've not spent time in the San Juans or Elks ... I'm an out-of-stater who is only ever in Denver or CO Springs for short times). Have any of you ever noticed this?

One more question prompted: does treeline elevation differ by slope aspect (north, east, south, west)? If I had to guess, I'd think that south and west slopes have higher elevations but perhaps the difference on a single mountain isn't much.

But in the desert-alpine treeline, it says:
"Many south-facing ridges of the mountains of the Western U.S. have a lower treeline than the northern faces because of increased sun exposure and aridity."

I think these seemingly contradictory statements imply that whether northerly slope aspects have a lower or higher treeline depends on whether aridity is a limiting factor in tree growth in the region. In relatively arid locations, trees might benefit from the cooler, shaded northerly aspects, allowing them to grow higher there than on the southerly aspects. But in wetter regions, the treeline could be lower on the colder, shady north slopes, because temperature is the primary limiting factor, not moisture.

I think of Utah as relatively arid (more so than Colorado), and I wonder if that explains why treeline in Utah is lower there than in CO.
https://www.listsofjohn.com/m/ekalina
Top

In the northern Wasatch and Wellvilles, the timberline drops down to around 9000 feet. I believe that this due ot the heavy lake effect snowfalls. That part of the Wasatch gets more snow than anywhere else in the Rocky Mountains. All of the peaks there are below 10,000 so none are high enough to form glaciers despite the heavy snowfall. Thurston Peak (9706 feet elevation), Francis Peak (9540), Mount Ogden (9572), and Box Elder Peak (9372) are all above timberline. In most years some of those peaks hold snowbanks year round.

Farther south and around Salt Lake City the timberline is around 10,000 feet. In the Unita Mountains is around 11,000 feet. The Wasatch get more snow than anywhere in Colorado and the Uintas are in far northern Utah, so it's easy to see why the timberline might be lower there.

I have no idea why the timberline is lower than Colorado's in the rest of Utah. I have wondered about that too. Those mountains don't seem to be any snowier or colder than Colorado's, so I don't know why.

The highest summit I am aware of in Utah that is forest clear to the summit it Abajo Peak at 11,360 feet. Lots of peaks in Colorado that are higher than that are forested to their summits.

Mt Ellen in the Henry Mountains is well above timberline and at 11,522 feet and is in Southern Utah. None of the mountains on the same latitude seem to have a timberline as low in Colorado.

Even weirder, the timberline seems to be lower in Arizona than in most of Colorado. I don't know why.


That further prompted me to wonder if there is much variance within Colorado itself, say from the Sangres to the Mummy range, on treeline elevation?

There is, but not as much varience as in Utah.

In places that have cold weather and heavy snowfall, the timberline does drop in Colorado. It's around 1000 feet lower in Rocky Mountain National Park than it is around Blanca Peak.

The lowest timberline in Colorado seems to be in the northern Park Range and eastern Elkhead Mountains. There, some of the 10ers are above timberline.

Hahns Peak seems to have the lowest timberline in Colorado: 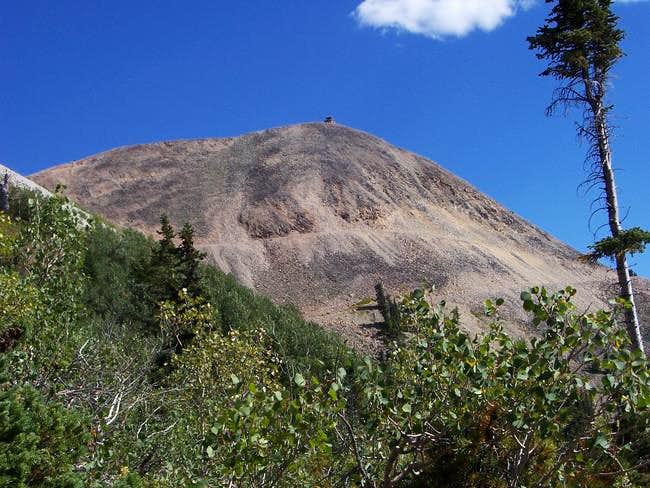 Across the valley Sand Mountain (10,847) is just above timberline. In the Mount Zirkel Wilderness and Sierra Madre the timberline usually ranges from 10,400 to 10,800 feet, with some scattered places up to 11,000 or a little higher.

On a different note, Maybell Colorado is actually lower than Colorado Springs and only a few hundred feet higher than Denver. Even so, the coldest temperature in Colorado was recorded there (-61 degrees) and it's one of only four populated places in the lower 40 that have hit -60 degrees more than once. They can have yeer round frost there too and every month of the year and even July has dropped down to the mid-20s. There are no areas above timberline in the vicinity, but this does show that the climate is much harsher in NW Colorado than the rest of the state at similar elevations.
Last edited by Scott P on Fri Jan 08, 2021 9:33 pm, edited 1 time in total.
I'm slow and fat. Unfortunately, those are my good qualities.
Top

ekalina wrote: ↑
Fri Jan 08, 2021 8:56 pm
I think of Utah as relatively arid (more so than Colorado), and I wonder if that explains why treeline in Utah is lower there than in CO.

Overall Utah is drier, but that's due to the deserts and valley floors. Some of the deserts and valley floors recieve less than 5" of precipitation a year. Utah has a lot of large areas with less than 8" of precipitation a year. Colorado only has a few and they are smaller. The higher mountains of Utah however are not drier. In northern Utah the mountains overall are much wetter and snowier than Colorado (though still with less summer rain and fewer t-storms).

Outside the Wasatch, the entire spine of mountain east of I-15 all the way to near the Arizona border gets more snow than almost anywhere in the Colorado Mountains. The Stansbury Mountains also get a lot of snow.

The rest of Utah's mountains seem to have similar precipitation values than the Colorado mountains at high elevations.

It's the deserts and valley floors where Utah is drier than Colorado (in some areas, quite a bit drier).
I'm slow and fat. Unfortunately, those are my good qualities.
Top

Good info Scott. I found some maps of annual liquid-equivalent precipitation in Colorado and Utah. The scales are similar, but not exactly the same. Even so, you can see many of the characteristics you pointed out.

There is also the inverse treeline in the desert, where forest starts higher on the mountain. Some high ones may have the Friar Tuck Tebow look.
http://www.listsofjohn.com/m/cougar

"If we don't change direction, we'll end up where we're going."
"Bushwhacking is like a box of chocolates - you never know what you're gonna get."
"Don't give up on your dreams, stay asleep"
Top
Post Reply
6 posts • Page 1 of 1