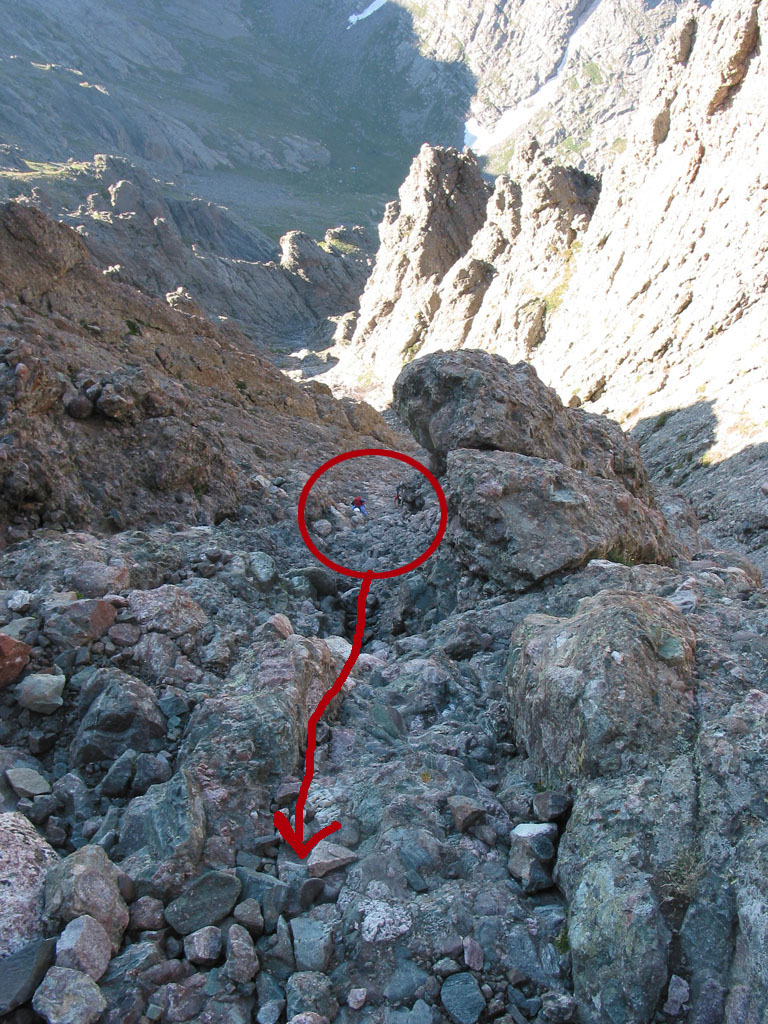 I think this is the area we faced in, the circle... other than that... faced out.
Thanks for the photos.
JQ
Top

pfiore1 wrote:
Tell them and people like them that the mountain is closed, no more admittance, their amusement park is closed. The Crestones have reached full capacity for the day and the Custer County Sheriff Department is on their way right now to enforce the mountain's closure. I can't believe we don't have 100+ missions per summer.

Hehe, next time I’ll try that. When it happened, I yelled for them not to move until we caught up to them. When we got there, they were trying to crossover to the west gully...200 feet too low. When we got there, one of them mentioned they got a little scared, so I laid into a “if you are scared here, turn around now bc it will only get sketchier and we can’t rescue you”.
Advice was not taken. What can you do.
Photography Website: http://www.jordanchapell.com
Top

Hjelmstadlt wrote:I was up in the Sangres this past Saturday and climbed the Crestone Needle from its standard route for the first time without snow. I knew the general way from past experience letter boxing up and down the steep gully but without snow I was alarmed at the horrendous amount of poorly cairned routes. This route is classified as class 3 on the route description but many of the cairned routes require a couple of class 4 moves and are very difficult to follow. In just the short amount of time I was up there I witnessed a group have to arrest a fall of a lesser experienced climber attempting a class 4 down climb as well as 3 climbers go down the wrong gulley including my own partner because of poorly placed cairns. I luckily caught my partner but the other group of two hiked all the way down the gulley and unfortunately cliffed themselves out and had to get rescued by other climbers. I feel, due to the heavy traffic on this route that a problem such as this should be addressed to prevent further accidents. I would recommend a better designated route or an upgrade of the route from a 3 to a class 4.

Agreed. Did Crestone Needle today and the crossover from the East to West Gulley definitely required a class 4 move. With the lack of cairns, there were a couple of spots I got off route and it turned into class 4, although on the down climb it was much easier and the only class 4 move I made was the crossover again, however for the sake underestimating the difficulty of the route, I'd say upgrade to class 4 as well. CSAR was up there today getting a climber who had also cliffed out. I personally felt like there were enough cairns to make it fairly obvious where the route went, never felt truly lost. However, with CSAR having been there as I was climbing, it seems to be pretty easy to get off route. As far as addressing the problem, Only a couple more cairns, or even a bullseye target like on Longs Peak at the crossover between the gullies would be enough to prevent a lot of these accidents.
Top

Thanks JQ and highpilgrim for the photos, excellent! I have heard several others say before they don't understand why East Gully isn't the standard route. After reviewing your photos and reading through this thread and others I would have to agree. Planning for Needle August 10th or 11th.
Last edited by randalmartin on Wed Jul 11, 2018 7:28 pm, edited 2 times in total.
Top

pfiore1 wrote:Hey, what's up Woody? Good to see you on here. With all this talk about descending the West Gully too far down...guess what just happened? Again. Late last night during our General Monthly Meeting we got a call from dispatch that another climber was cliffed out down low in the West Gully, same spot as usual. We got going at 0300 and got him out safely this morning. Just got home and read all these new comments about the Needle's gullies. This time the climber did not miss the crossover but rather descended back down the West Gully after he and his partner lost their bearings apparently very close to where the trail restarts from the bottom of the East Gully back to BHP. Glad he made the smart decision not to push his limits and attempt to downclimb further or ascend something he was very uncomfortable with. When in doubt, stay put and call for help. There has been so much traffic down the West Gully that there is now a path taking shape. Even though there are no cairns leading down the West that low, the vegetation is getting so trampled that there appears to be quite a distinctive looking route, until of course it cliffs out. I've got a bad feeling these incidents and worse are only going to get more frequent.

And thanks Tornadoman for the waves. I'm sure that was Jamie thanking you for having helmets. We were just so surprised at how many people didn't care about their own heads earlier that day. Glad you had a great time up there this past weekend.

And thanks to everyone else for those kind words.

I think I passed you guys on the way down from the Needle today. Glad you guys were able to help the climber and seems like it all went well.
Top

randalmartin wrote:I have heard several others say before they don't understand why East Gully isn't the standard route. After reviewing your photos and reading through this thread and others I would have to agree.

I’ve done the Needle twice, and I don’t understand why people switch gullies either. I think it’s simpler to just climb all the way up a single gully. That way, it’s not possible to miss the crossover on the descent.
"Adventure without risk is not possible." - Reinhold Messner
Top

One big reason people switch over is Roach recommends it.
Top

Another may be that this website describes crossing over and has pictures of where to do this as the standard route description.
http://listsofjohn.com/CompletionAll.php?M=dpage"
www.mountainproject.com/u/derick-page//110079707
"Resist much. Obey little." -Abbey
Top

Another may be that this website describes crossing over and has pictures of where to do this as the standard route description.

Yes, but the issues with people botching the crossover have been so well-publicized that I’d think fewer people would follow that route.
"Adventure without risk is not possible." - Reinhold Messner
Top

I personally have done the Needle about twice ( second time was only 100 feet shy of the summit - weather moved in ) and have done the crossover from east to west both times. That dihedral area is a tad spicy ( unless I'm taking the wrong line ) and both times felt harder than class 3. Otherwise beyond needing to be a proficient climber and comfortable with lots of scrambling and exposure, I've never found this mountain to be terribly hard for route finding. Cairns may help, but then again I've followed cairns on several mountains that led to worse routes than where my gut was leading me. Some people just shouldn't be up there, or should go with someone that knows what they are doing. Unfortunately those people will always exist and no amount of advice giving and cairn building will convince them otherwise.

A couple years on the Needle I encountered a gentleman with a dog and a Coleman lantern heading up BHP. No backpack, just a water bottle in his pocket. Anyway we catch up to him and ask him what his plans are, "I'm doing both of them" he says, "Crestone Mountain and Crestone Peak!" I asked, "With your dog? And wait, you're doing the traverse? Also, it's Crestone Peak and Needle". He replies, " well I'm waiting on my buddies, they said they'd meet me on the traverse today with some rope so we can get the dog across." Now remember, this guy has no pack, no harness, no climbing gear, and probably has the movie "Cliffhanger" as his reference point for mountain climbing. I promptly tell him that I don't think his dog will make it across, but its possible they can make it up Crestone Peak if they were careful. He splits off toward Cottonwood lake and we don't see him until we are heading back down from Crestone Needle several hours later.

Heading back toward BHP to get back to camp, here comes Coleman lantern Joe with his dog 100 yards ahead of him off leash. No lie, I thought he fell and the dog was on its own -he was 5 minutes behind him. Here he comes, almost to the base of the east gully and about to start climbing up the Needle. I ask him where he is going as the summit was covered in a thick dark cloud at this point. He says, "Back to camp". No kidding, he almost started climbing up the east gully of the Needle to get back to camp! I pointed back toward the obvious trail for BHP and said, "That is the way back to camp, there's the pass you came over earlier today!" I had to tell him this multiple times as he did not believe me. He ended up sticking with my party all the way back to BHP. The entire time telling me about his crazy day and other various misadventures he's had. He was shocked his friends with the rope never showed up. I believe these friends to be hallucinations or maybe something in a dream because the whole thing sounded made up. Upon arriving safely on the ground of camp, he thanked us and offered my party and I some Bud Light. I told him no, as I'm a beer snob and don't drink that swill.
Top
Post Reply
34 posts